The final exercise demonstrates the advantages of working reproducibly.

You have discussed the report with your colleagues/manager/client.

Disaster! It has emerged that the cashflows for business lines 5 and 6 should not have been included in the analysis and the discount rate should have been 2.75% p.a.

If your workflow looked like this you would have to amend the analysis in Excel and manually update the Word document. 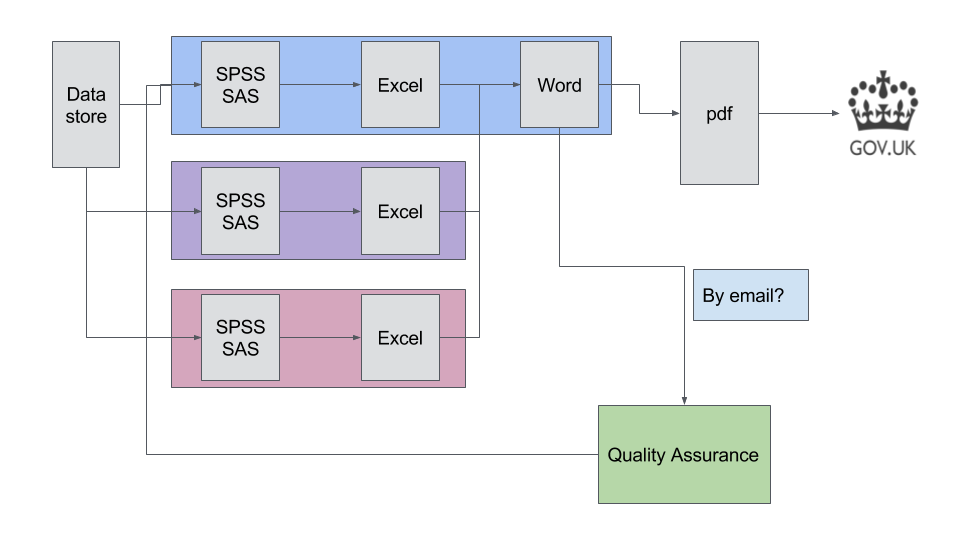 Image above from the RAP Companion

Manual steps such as these are time consuming and can introduce errors.

Critically, a mismatch can emerge between the report and the underlying analysis. For example, you might update the discount rate in the report but forget to do so in the spreadsheet. Would this get caught when the work was checked?

Working reproducibly minimises the risk of these errors and allows changes to be made efficiently.

In order to make the required changes:

Before creating the report, run your tests in the console to check that they still pass.

You can see that three tests have passed but one has failed.

Reviewing the output from testthat reveals that:

To correct this, go to test.R and change line 6 to expect_equal(ncol(cashflows_to_use), 4). All tests should now pass and you can finalise the report.

Open reports/report.Rmd (in practice you would likely also need to update the wording) and click Knit. A new report will be created with the updated results.

Note how the figures, plot and tables have all updated to reflect the new analysis.